Not all objects behave like a pair of hands. The common water glass, for example, is identical to its image in the mirror. The underlying issue is the identity of an object and its reflection. Any object that is different from its reflection is said to be chiral. Otherwise, it is called achiral. Your left hand and your right hand are chiral, whereas the water glass is achiral. Basically, chirality is “handedness,” that is the existence of left/right opposition. Even if you had never heard this word, you do know the phenomenon. Otherwise, you would not be able to distinguish left from right.

Thalidomide is a sedative drug that was prescribed to pregnant women, from 1957 into the early 60’s. It was present in at least 46 countries under different brand names. “When taken during the first trimester of pregnancy, Thalidomide prevented the proper growth of the foetus, resulting in horrific birth defects in thousands of children around the world” [1]. Why? The Thalidomide molecule is chiral. There are left and right-handed Thalidomides, just as there are left and right hands. The drug that was marketed was a 50/50 mixture. One of the molecules, say the left one, was a sedative, whereas the right one was found later to cause foetal abnormalities. “The tragedy is claimed to have been entirely avoidable had the physiological properties of the individual thalidomide [molecules] been tested prior to commercialization [2].” 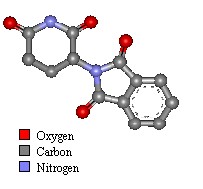 These examples are just the tip of the iceberg. DNA, proteins, amino acids, sugars are all chiral. Mirror image amino acids are called L- and D-aminoacids. Human proteins are exclusively built from L-aminoacids. The origin of this fundamental dissymmetry is still mysterious. When interacting, molecules recognize each other just as your right hand distinguishes another right hand from a left when you shake hands. This is why mirror image molecules, like mirror image Thalidomides, so often have radically different fates in our bodies.

Drug synthesis is an enormous worldwide market. As a consequence, issues related to chirality have gradually pervaded chemical research. This background is to be kept in mind when appreciating the importance of chirality, whether in science or in everyday life.

To whom is this site proposed?

You could simply be curious about symmetry issues. No background in science is needed to browse through the “beginners” section (still to be written!). This site was tentatively conceived to provide you information, hopefully without boring you with scientific jargon. If you feel that this site is a failure in that respect, you are encouraged to complain here.

Besides, research results will also be presented. Chirality is an old theme in many branches of chemistry and biology, with overwhelming practical importance, and physicists have long paid interest in symmetry matters. As a result, there is a wealth of published articles dealing with chirality in the physical sciences. However, this site is primarily focused on recent theoretical progress in a quite unexpected direction: the description of chirality. What we mean by describing chirality is presented in the research results section. Some scientific background is required in this part of the site.

Have a look at the site map for more details.